This was a particularly deadly session for the party’s NPC’s and hirelings, Plumb the rogue and four meatshields lost their lives due to some unlucky wandering monster rolls and a few powerful skeletons. DM note: One of the things I’ve tried to do with the encounters in the Caves of Woe is make them unusual or different in some way. In this case, I gave the ‘fossil skeletons’ 2 HD and had them taking half damage from edged weapons and arrows.

Farfuleg the Bold – A fighting-man rescued from the dungeons who agreed to stay on and help
Plumb the Rogue –RIP Killed by giant rats!

The party continued exploration of the southwest area of caves, mapping the swamp entrance from above (via a hole in a large tree). Wandering monsters were the order of the day for this session, the party was weakened first by a few wolves, then by a swarm of giant rats, who proved particularly deadly. Both Plumb and Omes fell in a battle against five of the creatures. A giant spider wandering the corridors, however,

A secret door noted by M the Elf led to a small sealed-off section of dungeon containing three rooms, infested by powerful skeleton warriors. The skeletons were turned early on by Brother Gar, but in trying to battle and fully vanquish the undead creatures, three more mercenaries were killed. Only the use of smart tactics saved the rest of the party, who retreated early on and funneled the skeletons towards them in small numbers. 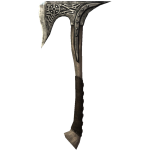 the rubble in the skeleton rooms, Garros was quite pleased to have recovered a magical handaxe that returned to his hand each time it was thrown.