This was a fun session I ran for one player with a PC and several hirelings. After hearing the rumors in town about the Caves of Woe and the wild exploits of Garros the Dwarf, et al,  he decided instead to explore the nearby Caves of Discomfort.  This was not the wisest decision, read on for the details…

Go the Black, a freshly minted Elven fighter/mage, gathered a few hirelings and made off for the Caves of Discomfort in search of a bandit troupe. Reports had them raiding supply caravans from the north into Ravendale from a cave they were using as a base; the proprietor of the Dead Witch Inn, Latina, offered 80 gold in reward for anyone who could ensure the next caravan’s safe arrival.

With the knowledge of the approximate location of the caves, the party set out at dawn, under grey skies and with a late fall chill in the air. They headed north along a wagon track, the dense Ravenwood close on either side. Dingo was sent ahead to scout, and indeed, after a few hours the party heard his call from beyond a hill just ahead. It was only a minute before the party saw Dingo running towards them as fast as his Hobbit legs would carry him, his sling gripped tightly in hand. Two Orcs followed closely, snarling and brandishing a club and sword. They ran smack into the party’s front rank as Dingo slipped in behind to safety, drawing his sword.  After a few moments the Orcs lay dead, but the party’s celebration was cut short as four more Orcs came at them from atop the hill. Perhaps the two were just a scouting party? In any case, melee was joined again. Victory was theirs, however in the process Marton was wounded. Go the Black tended Marton’s wounds as best he could, while the party scavenged what they could find from the bodies (including an ear from each), along with any salvageable weapons. Go noted a black arrow tattoo sported by all of the Orcs.

Continuing on, it was but another hour before Dingo spied a cave entrance 60 yards from the wagon track, where it turned north and west. Inside he could see three men, seated around a fire, their backs turned away. Go approached the front of the cave, while Dingo and the others moved left, approaching the cave from the west. The plan was to get Dingo in the scrub brush above the cave, with his sling, while the mercenaries were to sneak attack from the west. Plans quickly changed, however, as a crossbow bolt whizzed past Dingo’s head. A lookout! The man was above the cave entrance, in the very spot where Dingo sought to hide! Dingo h 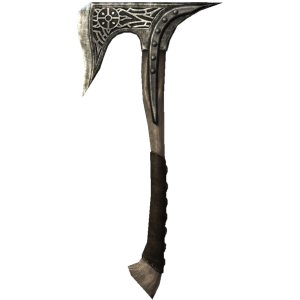 urled a sling stone, which struck its mark, wounding the lookout. The man yelled in alarm, and the three men in the cave stood and ran towards Go, swords drawn. They were as yet unaware of Dingo and the others.

Go threw his handaxe towards the men (whom he presumed were the bandits they had been searching for), killing one, but the other two were upon him in a flash. Marton and Sturig were just out of range for their thrown spear and handaxe, so Go fought the men alone as Marton and Sturig rushed to his aid. Too late, a bandit’s sword wounded Go, another beheading him quickly thereafter. Marton and Sturig avenged their master, killing the two bandits and watching as Dingo slew the lookout with another well-placed sling stone.

The party searched the bandits and the cave, finding a bit of gold and a jade lion figurine. They noted the bandits had the same black arrow tattoos as the Orcs. They also saw a locked door to the east, and a large pile of rubble to the north, the latter appeared to be blocking an exit. The party gathered the body of Go, intent on returning to Ravendale. As luck would have it, the caravan they were sent to protect rounded the bend from the north at that instant, and they rode back with it, collecting their reward in town. Lord Kelby was interested in the six Orc ears, and gave the party a further reward of 80 gold for removing a clear future threat.