I started a new sandbox campaign about a month ago, this time 1974-vintage OD&D  but with a custom thief class. It’s loosely based on an OD&D play-by-post I ran at the Unseen Servant forums a couple of years ago, but with some changes. I started with a simple town map done up in text, like I did for some of my previous adventures.  I then added in the nearby geography, just a descriptive paragraph or two, and a local area hex map. I then filled in the town with a few important NPCs and some adventure hooks.  Here is the area background around the town of Frostmark, this is the standard idea of a safe-haven town on the wild borderlands, in this case off to the west.

To the west of Frostmark are the Broken Plains, across which cold winds bring snow and storms from the western reaches of the Crag Peaks in the winter. Farther west are wild, untamed frontier lands said to hold ancient ruins, wealth and secrets. To the east, the valley of Silverwood is sheltered from the winds and more temperate, home to farms and the Druids. To the north the North Road leads to the Iron Hills, then the Crag peaks, through which the Miner’s pass leads to Bryn, the home of Lord Percy. To the south, the Twin Towns road leads along Lake Mistwater, to the lakeside towns of Fishpot and Stewgray. The traveler’s inn ‘The Unseemly Wench’ is along this road.

The Twin Towns road brings fish and crafts from the south. The Silverwood Valley brings wool and food from the farms there, along with game killed by hunters, stone from local quarries and wood from the forests. Bryn brings hard goods via the Miner’s Pass. There are also mines near the pass that provide iron and precious metals.

Here is the player’s town map, at some point I’ll hand-draw it but for now this works: 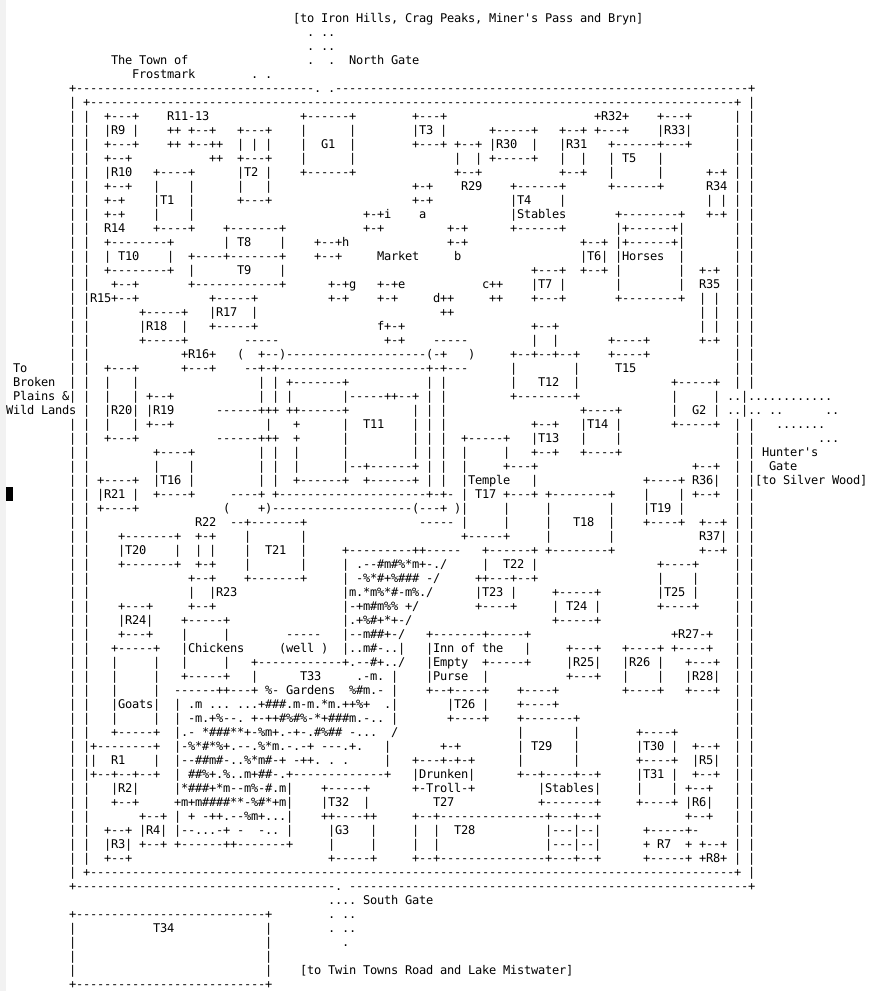 The thief class I added because I have one player that really likes to play thieves. I based it on the simplified thief in Delving Deeper, Seven Voyages of Zylarthen, and the original thief as Gary Gygax envisioned. This thief is a fighter subclass (with he same XP requirements), and can actually use any weapons and armor, but can only perform thief tasks in leather armor. For my pure fighters I’ve added a simple weapon specialization and a second attack after any killing blow, but thieves forego these martial abilities and instead can sneak, hide, remove small traps, pick pockets and locks, and backstab (note no climbing walls). All but the backstab succeed on a 1-3 in d6 at 1st level. Thieves also are lucky, and can re-roll a die that affects them once per encounter. I allow any character to find traps and secret doors, these tasks are purely descriptive – which essentially means if an area with a trap or secret door is searched, I will describe it in such a way so as to make the door or trap obvious. They can then tell me how they are opening the door or (as a thief) they can make a roll to disarm the trap. I my view this solves two problems with thief skills, one is that the chance of success is too small at low levels, and two, the this prevents the monotonous “I check for traps” rolls. When my players say that, I ask them to describe where they are looking and we go from there. It is a bit more work on the referee’s end, but I think adds to the sense of accomplishment when a trap or secret door is found and subsequently overcome. I’ve been toying with this idea for a few years.

We’ve had three sessions so far with one PC death, and it’s been loads of fun. In future posts I’ll detail my house rules and give some session reports.