Link to prior sessions
Discussion here

Upon returning to Frostmark, Ambrose and Zort made a visit to the
Temple of Soldra with Imric’s body in tow. Father Sunamel was only too
happy to assist, for a suitably large donation. 1,200gp later, Imric
was revived but was feeling under the weather, so he decided to stay
in town and rest for a few weeks while his companions readied
themselves for the next adventure. After some discussion they decided
to head back to the Chaotic Caves, so Ambrose, Roger and Zort procured
seven light horses, a mule, and six javelins (those last to be handed
out to the hirelings). Ambrose paid Ajax a visit and convinced a
warrior named Kell to join the expedition.

A few days later the party headed out to the caves. The two-day
journey north and west was uneventful, if a bit cold. After scouting
the caves they decided to investigate an open area to the south, where
they could see a raised stone patio, leading through large archway and
then into the depths of the hill. The party cautiously approached, led
by Roger. They climbed onto the patio and could see scattered broken
rock and bones. Vol and Sundarr lit torches, and they cautiously
entered what they could now see was a long, pillared hall. The floor
here was also littered with bones, some human. 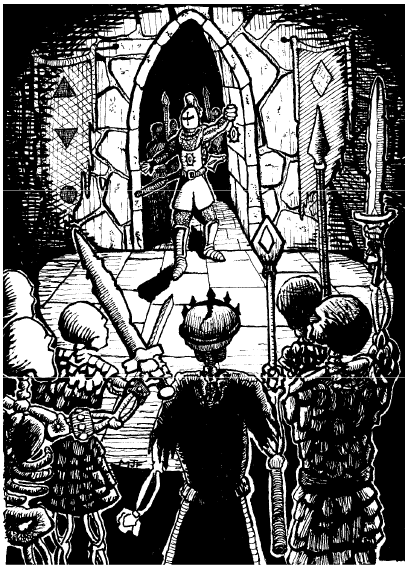 Almost immediately the party was beset upon by a horde of undead – a
dozen skeletons and 3 ghouls, who emerged from alcoves in the
walls. Roger fired his bow and fled back to the group, and Zort
stepped forward, presenting his holy symbol. Two ghouls fled from the
power of Odin away into the darkness, and five skeletons crumbled to
dust. The one remaining ghoul clawed at Zort, who felt his limbs
stiffen as he toppled over, helplessly paralyzed! Seven skeletons
advanced on the rest of the party, and in the ensuing battle all seven
were destroyed, but the price was high. Kilmox, Zell and Roger were
run through by skeleton swords – the hirelings were dead, and Roger
barely clung to life (Ref. note – Roger went to -4 HP and made his CON
save versus death). Ambrose saved Zort from certain death as the one
remaining ghoul tried to feast on Zort’s paralyzed form. Only the two
porters, who had hung back from the melee, were unscathed. With two
dead and three wounded, the party decided it was best to return to
town. They placed the hirelings’ bodies on the mule and headed back to
Frostmark, with not a single gold coin to show for their trouble.

1 thought on “The Chronicles of Nolenor Play Report #16 – Damned Ghouls!”