Our gaming group has had a fun couple of sessions playing Moldvay Basic D&D (I’m calling it B/X even though we never used the Expert rules) in the past two weeks. B/X was a game I never played or even owned in my youth, I started with Holmes Basic and, like most people back then, quickly moved on to AD&D 1e. When I got back into role-playing around 2009, it was first with Swords & Wizardry White Box. B/X never really hit my radar until a few years later, when I joined in on some play-by-post games on the Labyrinth Lord forum. Some of the first games I ran for our gaming group were Labyrinth Lord games (the Village of Larm). 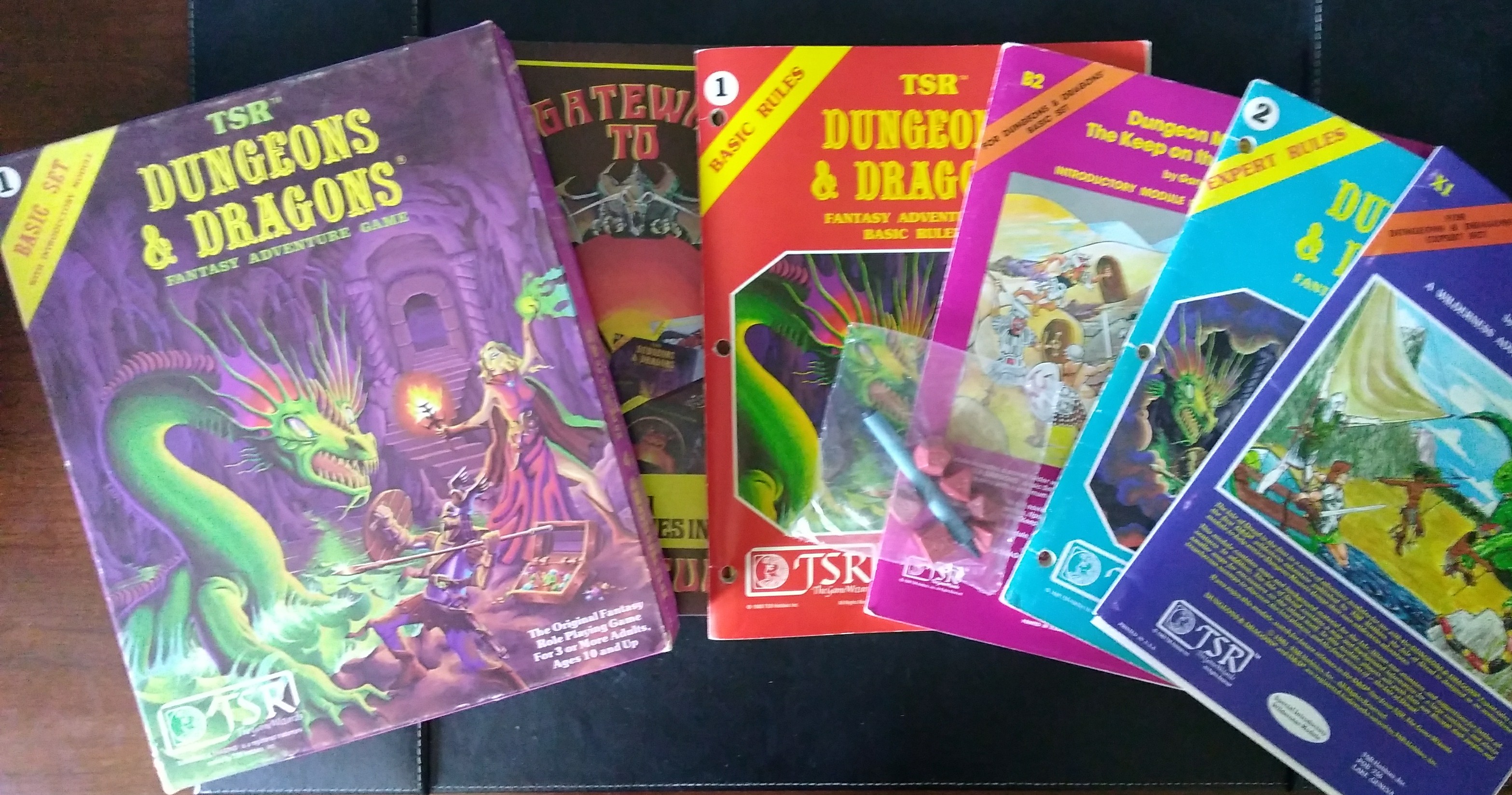 Later I was able to add B/X to my collection thanks to EBay – a Basic Boxed set with B2 and dice, an Expert booklet, and a copy of X1. I perused the books and modules but never played them. Labyrinth Lord and BFRPG seemed to scratch the Basic itch for a time. But lately I’ve been steering away from the retro-clones and back to the original games they were based on. The easy availability of the PDFs is one reason. Even if the players don’t have the original books, they can get a PDF for five bucks or so. Another is just for something different, and also to see what I’ve been missing all these years. I am sure none of my observations are new, a trip around the old-school forum-verse and blogosphere will turn up many, many discussions on B/X. But when did that ever stop a blogger!

Towards a More Understandable OD&D

The first thing to note about B/X is that it is a wonderfully clear restatement of OD&D. It fills in the gaps left by that game and clarifies a lot of poorly detailed rules. Holmes Basic tried to do this as well, but it still had problems, mostly left there due to the hackish insertion of AD&D-isms (still, Holmes has hands down the best prose and introductory dungeon of any edition of D&D). Labyrinth Lord was a restatement of B/X, but there is a lot that is different about Labyrinth Lord, and it largely forgets the OD&D base that B/X was forged from, both in rules and feel. B/X keeps the coin encumbrance of OD&D (it’s a shame all of the B/X or OD&D retro-clones discarded such an elegant system in favor of tracking equipment weight in pounds, effectively ensuring no one would track encumbrance) and also keeps the coarsely-grained OD&D alternative attack tables. It keeps the underworld adventuring rules and three-point alignment. It clarifies the Chainmail morale system that is only referenced in OD&D, fully details the combat system, keeps the four core armor classes, and fills in rules around retainers and morale. It keeps intelligent swords and stronghold encounters. Oh, and level titles! B/X keeps the OD&D level titles. All while still explicitly making sure you know that you can make this your own game.

The D&D game has neither losers nor winners, it has only gamers who relish exercising their imagination. The players and the DM share in creating adventures in fantastic lands where heroes abound and magic really works. In a sense, the D&D game has no rules, only rule suggestions. No rule is inviolate, particularly if a new or altered rule will encourage creativity and imagination. The important thing is to enjoy the adventure. – Tom Moldvay, from the forward to Dungeons & Dragons

As an aside, this was in sharp contrast to Gary Gygax, who by now had come out as strongly against taking any such liberties with AD&D (see Dragon #26).

What do you mean I can’t play a Halfling thief??!!

Race-as-class is perhaps the largest deviation from OD&D, but as a simplification of “Halflings can only be fighters” it is an understandable change for the time. It also fixes the issue of low level caps and deals with the multi-class Elf by giving players a single advancement chart to use. I used to dislike race-as-class, but I can see the appeal if you think of the demi-humans each as their own bundle of special class skills. There are also plenty of additional race-classes for B/X, and should one of your players want a thief-like Halfling I’m sure you can find one.

Another way B/X deviates from OD&D is in the dungeon wandering monster tables. In OD&D you have a meta-table, used to determine which level of monster table to roll on, then the actual monster tables, one for each level of dungeon. In B/X you have the latter but not the meta-table, so wandering monsters become much less threatening. You can no longer encounter a wraith or gargoyle and TPK on dungeon level 1, for example. If you’re a player this is probably better, still it does give quite a different feel to a dungeon crawl. Mike Mornard, a player in Gary Gygax’s original D&D games from the 1970s, has said that wandering monsters in OD&D were meant to be terrifying. In B/X they are definitely less so, still the game itself is quite deadly as written. In our first game, we had three PCs die in a two-hour session.

When am I Gonna be Level 2?

While the character and monster XP charts in B/X are similar or identical to OD&D (using supplement I, Greyhawk for monster XP), advancement will be slower unless the DM fudges rolls on treasure tables, or follows the advice in the rules to place special treasures before using the tables. The treasure tables are nerfed in B/X as compared to OD&D when it comes to values of individual gems and jewels. These are the best way to carry wealth out of a dungeon in OD&D, and the gem/jewel value table in Monsters & Treasure can lead to some pretty hefty value rolls, giving huge XP gains at low-to-mid levels. Not so much in B/X.

The nice thing about B/X is that there is a metric shit-ton of freely available material to use in games, just due to the popularity of Labyrinth Lord and BFRPG. The Dragonsfoot website has a whole section devoted to Classic D&D resources, and Wizardawn has some insanely useful generators just for B/X. I also link to a few B/X character generators on this blog.