After returning to Frostmark, the party rested for that day and the next, taking the opportunity to pay their retainers and re-stock for a trip north to the Chaotic Caves. They set out the next morning on horses, with a light snow falling and as normal headed north along the road. After a few hours, however, they decided to take a different route to the caves. They cut west across the Broken Plains, and into the Barkwood, intending to turn north. The day was uneventful, and they camped in a clearing. Roger built a small fire and took first watch.

After a couple of hours a deer ran through camp, obviously spooked. To the north, Roger could hear voices. He woke Imric and the two scouted in the direction of the noise. After a few hundred yards, they could see four Hill Giants and four Grendel around a fire, eating a late meal. There were four bulging sacks next to the fire.

They were too far from the Giants to overhear what the details of was being said, so Imric quaffed a potion of clairaudience, and heard the group would move south in the morning. Thus warned, they returned to camp and told the others what they found.

After some discussion, the party decided to try and steal the Giants’ sacks. They hatched a dangerous plan – Roger would advance on the camp and wait until the Giants and Grendel were asleep, then sneak in and grab the sacks one at a time. Meanwhile, the rest of the party would head east a short distance into the forest in case they were needed. Of course, none of this went as planned – Roger advanced on the camp, but was spotted by a Grendel who had been left on watch. Roger and the creature traded bow shots, wounding one another, and the Giants were now awake and quite angry. Roger fled the camp.

Hearing the commotion, the party advanced on the camp and found it empty. Roger was nowhere to be seen, and neither were the Giants or the Grendel – except that the Giants had left their sacks behind! Ambrose and Imric took advantage of the opportunity and grabbed two of the sacks, all loaded with coins, and fled north.

Meanwhile Roger had successfully evaded his pursuers, and with a bit of a head start had led the Giants and Grendel away from the party. He was still in the forest, however, alone and at night, without his horse. He applied a poultice to his arrow wound, and rested high up in a large tree until dawn. With the light he was easily able to track the party, catching up with them later that afternoon, outside of the caves.

After hiding the sacks of coins among some nearby rocks and scrub, the party decided to explore an area unknown to them, to the west. Near a fast-moving stream, they found a cave entrance with wooden totem poles on either side and entered cautiously. A hundred feet down a dark tunnel, they were attacked by a giant gecko and several lizardmen. They had no problem defeating them, and continued on, exploring the rest of what turned out to be a lizardman lair. After a few tough battles, they had defeated the leader but were all wounded. They grabbed what treasure they could find and headed out of the caves, back to town. 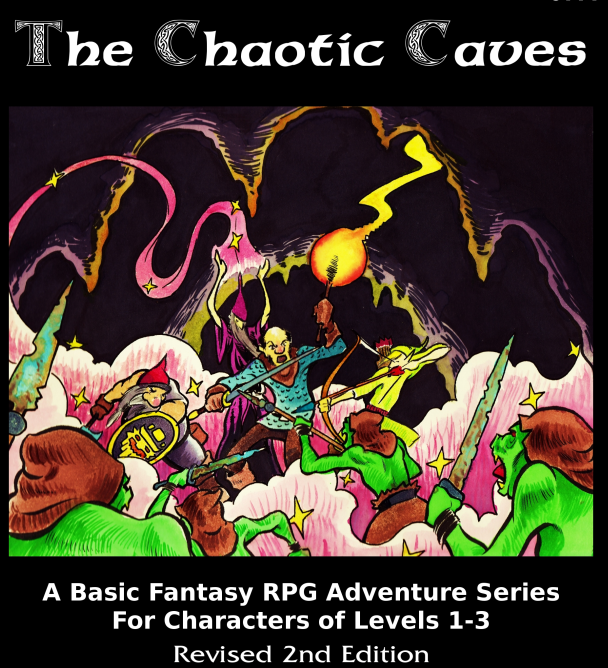 Referee notes: I’ve been using the BFRPG module The Chaotic Caves, modified (mostly on the fly) for OD&D and to adjust the encounter difficulty and treasure up, as the module is for levels 1-3. The separate cave lairs make it really easy for quick in-and-out sessions like these. The lizardman lair turned out to be quite a slog, however, with lots of narrow tunnels and small caverns that acted to restrict movement and melee choices, especially with a large party like this one. I tend to like sessions like that less – I think it’s more interesting for the players to have lots of tactical choices, like they did with the Giant encampment.

Speaking of Giants, they are one of the few wandering monsters in OD&D with real treasure: