Since I’ve embraced the Larm setting I decided to use some of the old Brave Halfling adventure modules associated with that setting, or from that time period. Most I have had for years but never refereed. One of those is the “Vile Worm of the Eldritch Oak”, which was in my Swords & Wizardry White Box collector’s box set, and which I was finally able to put to good use for this adventure. I modified it as needed, still it proved (almost) deadly for the party, and after this session I was not sure if any of the PCs would survive.

The party, with new recruits Laffson and Frakus, heard news of a missing family of sheep herders, the Lentils, to the south of Larm. They went to investigate and found the farm without too much trouble, after being pointed in the right direction by a neighbor, Berman. He told them he found the Lentil’s farm in a bad state this morning, with the dog dead and the wife, husband and son missing. The party noted signs of a struggle, and were able to follow some tracks into the nearby woods. Soon they came across an old hermit and his pet wolf, who invited them back to his home. He seemed harmless enough. 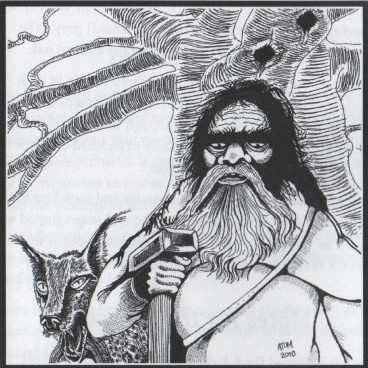 After a short walk, the hermit led them to a massive oak tree in a clearing, and beckoned them forward – was the tree was his home? As the party cautiously moved towards the tree, they were attacked by a lynx who had been hiding in the branches. The hermit dropped his pretense, as he and the wolf joined in the attack. The party prevailed, however, killing all three. On the hermit they found a ring, which Laffson pocketed [LL Note: +1 ring pf protection].

Turning their attention to the tree, they could see it was massive. The trunk was perhaps 40 feet across. They entered it through an opening in the trunk that was obscured by bushes, coming into a large hollow room. This was clearly a living area, with a table, a cask of wine, and a bed made of leaves. Frakus searched the leaf pile and found a chest made of wood, inside of which were some gold and silver coins, a potion, a key ring and a magical scroll [LL Note: Scroll of sleep and potion of inivisibility]. There were no other exits either above them or on the ground level, but in the center of the floor was a trap door. Laffson lifted it to reveal a winding staircase going down.

Arvay lit a torch and the party descended the stairs. At the bottom was a short tunnel and a door which opened into what could best be described as a torture chamber. There were tables and shelves with torture implements on them, shackles bolted to the floor, and two iron cages. There was a stone circle that appeared to be a well in the center of the room, and a large iron bell mounted on two upright stone slabs against the far wall.

In one of the cages were a woman and child, part of the Lentil family. They were of course very scared, but were able to say that farmer Lentil had been taken below by a “giant worm”. Mother and son were ushered outside the room with Arvay, and instructed to go back to Larm if the party did not return.

That done, Laffson examined the bell. It had a rope connected to it that went into a hole in the ceiling. Laffson ignored that mechanism and rang the bell by lifting the ringer. The party waited. After a few minutes, a giant, grayish-white worm with long tendrils surrounding its mouth silently emerged from the well and attacked. 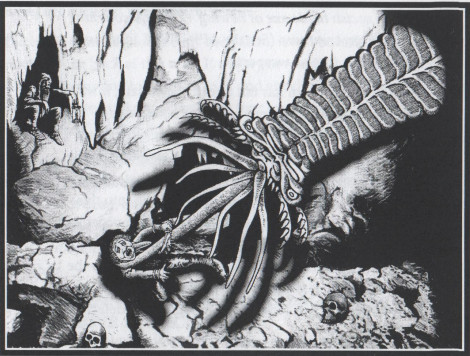 Here the party was not so lucky – their own attacks were ineffective, and, one after another, they succumbed to the worm’s paralyzing touch. The worm then methodically carried each of them down into the well, at least 100 feet down into its lair. The worm injected them with its eggs as they lay helpless on the cavern floor.

Meanwhile, up top, Arvay decided to peek into the torture room, noted the party’s absence, and headed back to Larm for help, the surviving members of the Lentil family in tow.