Cabin & Cellar is a small B/X adventure written by Vance Atkins with maps by Tim Shorts (I’m not sure where I got this adventure, it was in my collection of B/X adventure PDFs and I can’t find reference to it on the author’s website). This was a fun two sessions with lots of paralysis, and a ghoul with unusual charm powers. The PCs explored an abandoned farm that was actually home two two ghouls and a burial crypt/root cellar which as written was haunted by two wights. Because this was a party of low-level types, and no one had any magic weapons (and only one silver dagger), I removed the “hit only by silver or magic weapons” special ability. So they were essentially strong zombies.

The PCs heard rumors of an old farmhouse a short ways to the south, said to be the center of a few missing persons cases of late. Mayor Rusticus knew of the farmhouse, and told the party it belonged to the Priggin family at one time, but was now abandoned. He gave the party directions, and they set out the next morning.

After a two-hour hike, the party arrived at the old farmstead. It was surrounded by a low stone fence, inside which was a farmhouse and shed, two brackish pools, and a staircase down to what looked like a root cellar. A man and woman could be seen meandering about the main house. The woman spotted them and waived. 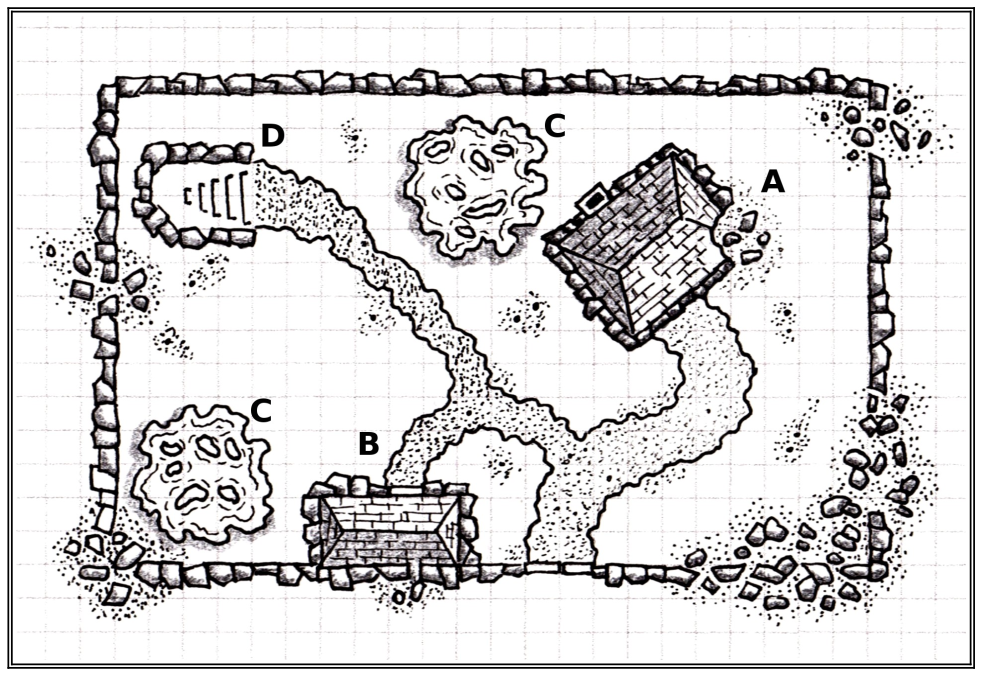 The party moved a bit closer, while Omes decided to hop the stone fence and get a closer look. As the woman waived and stared at him, Omes fell under a charm spell, and mindlessly moved closer to her. The others could tell something was wrong – for one thing, they could now see that the man and woman wore tattered clothes, and had an odd, pale complexion. Osan leapt over the wall and rushed to the aid of Omes, but he was too late to prevent the woman from clawing Omes. He fell, paralyzed. Osan grabbed Omes and pulled him back over the wall, even as the man and woman (now thought to be ghouls of a sort) walked back into their house.

The PCs huddled behind the stone wall and hatched a plan to sneak onto the house roof, which was made of peat and in disrepair. They thought to break through to attack the creatures within. They were able to do this, and could see the two ghouls eating body parts at their dinner table, but they did not have enough of an opening in the roof to attack from above. Thinking quickly, Dorful had an idea to force the ghouls out of the house by dropping some oil flasks onto the table and lighting it on fire. This worked, and they then fired arrows at the ghouls from above, killing them. In the house the party found some adventurer’s packs containing some gold coins, a bit of jewelry, a silver dagger and a scroll.

Meanwhile, Omes was still paralyzed, and in the care of Kroenen. The rest of the party decided to investigate the shed while they waited for Omes to recover. Gato entered through the shed’s rotted door, only to be surprised by a large grayish worm with wriggling tentacles that encircled a large mouth. Gato turned and ran, and the worm rushed out the door, surprising and attacking poor Arvay. He fell back, paralyzed, but meanwhile the others surrounded and attacked the worm, quickly killing it. A quick search of the shed revealed some coins and arrows (LL note: +1 arrows) in the refuse and offal on the floor, with half-eaten corpses draped over the rafters.

After a rest, both Omes and Arvay recovered, and the party went to examine the root cellar stairs. Osan descended, finding a trap door at the bottom of the staircase. He lifted it and peered within to see another staircase descending into darkness. Arvay lit a torch and the party descended about 20 feet, stopping at a small landing with a finished stone corridor off to their left. 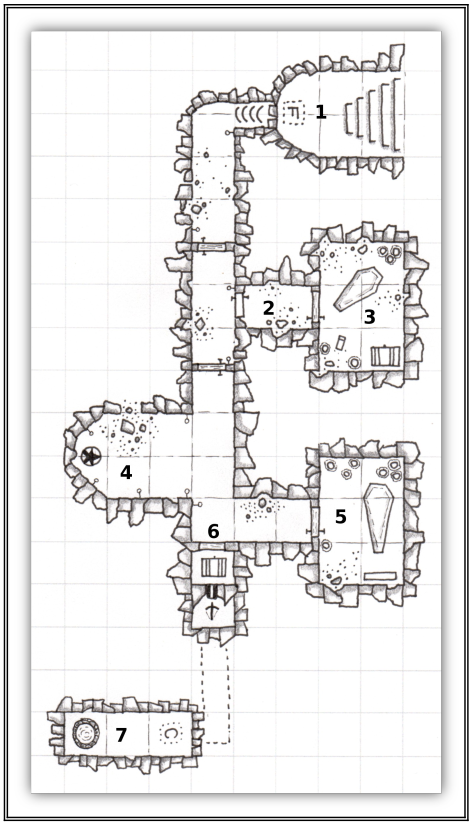 All was dark, although at one time the cellar was lit by torches, judging from the empty sconces on the walls. The party proceeded left, Osan in the lead. Omes opened the first door they came to on the left, which revealed a short corridor leading to another door. A dead body could be seen on the floor in front of him, Omes searched the body, but found nothing of use, only noting that he appeared to have died by being clawed to death. Opening the next door revealed a tomb, complete with coffin and various knick-knacks that the party surmised were belongings of the deceased. Omes and Dorful opened the coffin,and were not surprised to see a zombie-like creature come to life and attack. Several of the party were wounded by the creature’s claws, but they did eventually defeat it. They gathered what valuables they could find, and proceeded to the next opening on the left. This room was almost identical to the last, except the coffin contained a female zombie. Again the party fought and prevailed, again gathering some meager loot.

The party skipped the alcove for now – they could see it was home to a small statue – and proceeded to the end of the hall. There Osan detected a secret door. Behind it was a crossbow trap – narrowly avoided – and a small room containing a pool of water. Omes took a chance and drank from the pool, and felt invigorated (LL note: pool increased HP permanently). Soon all of the party had taken a drink, and finding nothing else of interest, they decided to leave, investigating the alcove on the way out. The statue was black stone, and depicted a woman in armor. Beneath it the party found a secret compartment which contained a scroll tube. Osan carried it outside and opened it, but when he looked at it it, the runes on the scroll glowed brightly and then exploded. Osan was nearly killed, and poor Kroenen, standing next to Osan, did not fare as well. They gathered his body and returned to Larm.