For a change I ran some Mutant Future for our gaming group, we had a fun two games and I hope there will be more sessions in the future. I continued from our prior sessions in and around the Hamlet of Blixter (you’ll recognize Jax from those old play reports). I based the scenario on “Re-energizers”, originally by Faster Monkey Games, modified on-the-fly to cut down on the play time required and also to reduce the risk level somewhat, as we had only two players.

Jax the mutant chupacabra and Hyacinth “Cindy” the mutant skunk were enjoying their lunch – rat-on-a-stick – at the Growling Porcine. Nyseld, the Hamlet constable, entered and told them to come quickly, that Dr. Frimost had powered down and they were not sure what was wrong.

They all met Gunning, the scrap dealer and general fixer in Blixter, at Dr. Frimost’s hovel/office. Gunning examined the good Doctor and determined that his battery had died. He knew that new batteries could be found at an abandoned bot factory about 10 miles up the road, but he warned of the danger – the last group of scavengers to enter the bot factory never returned. Undeterred, Jax and Cindy agreed to try and find some batteries. After all, the good Doctor had saved Jax’s life after the Pig Men raid, and he felt obligated to help. They loaded up Jax’s pickup and headed north along the road, into the wastelands. The term ‘road’ is not exactly accurate, perhaps rocky, weed-strewn and potholed path is more precise. The going was slow.

A few miles north of Blixter, Jax spotted something shiny flash in the corner of his vision, off the road among the weeds. He stopped the truck to investigate and got out. He saw a skeleton holding a silvered revolver, laying in the weeds, about 10 feet from the road. He had no time to examine it further, however, as the earth shook and a giant tentacle burst from the ground, wrapping itself around his waist. Cindy ran to assist as Jax blasted the tentacle with his shotgun. It released him, the tentacle now cut in half, but it was joined by five others, attached to the body of a giant land squid! Cindy was wounded in the ensuing battle, but they managed to kill the squid with the help of her heat ray mutation. Turning their attention to the skeleton, they found a serviceable six-shot revolver and a pouch with 20 rounds of ammunition and a few gold coins. Jax determined that the now cooked squid tasted delicious, so they threw it in the back of the pickup and continued on. 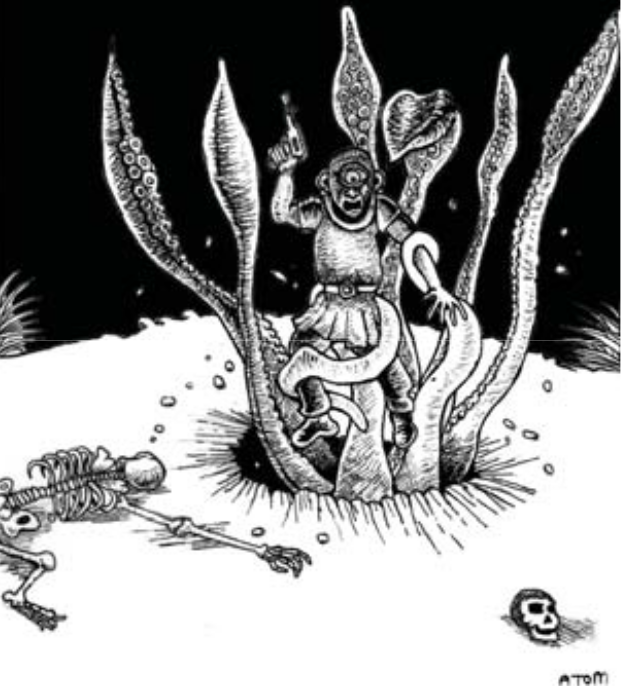 After a short drive they came up over a rise and saw the bot factory in the distance, off to the west. Jax made a quick recon trip, discovering a compound surrounded by a razor-wire fence with an open, damaged gate. He also found a dirt mound with a hole in it in the rear of the facility, outside of the gate – but in doing so he ventured close to the fence and became ill. He quickly moved back to the truck and he and Cindy agreed on a frontal entry.

After some brief preparation, they walked in through the front gate. The factory building was in front of them, a square structure about 200 feet on a side, and they could see a loading dock in front with a broken door and some rubble jammed within. To their right was a small out-building. It had been partially destroyed by a truck that had crashed into it. As they moved forward a turret appeared from within the wall over the loading dock and opened fire! They ran for cover towards the truck, for the moment safe from the bullets, but into a pack of snarling rot dogs emerging from the ruined shed. As they scrambled up to the roof of the truck, Jax was bitten by a dog (ML note – failed save vs. poison means Jax had contracted a rotting disease). The duo picked off the dogs one by one from on top of the truck, still apparently safe from the gun turret.

They decided the best course of action would be to approach the wall of the building from where they were, out of the shooting radius of the gun turret. They did that, and followed the wall to the loading dock. The climbed up and crept into the building, clambering over the rubble pile choking the doorway.

Inside they could see a large factory area, filled with conveyor belts, robot arms and boxes scattered across the floor. The ceiling was high overhead – about 40 feet, and holes in the roof gave some dim lighting. To their right was a long panel of lights and switches affixed to the wall, to their left a row of three smaller rooms. They went to the wall panel first, but could not make any sense of its purpose, so they walked over to explore the rooms. In the first they found an old desk and electronic device, half-crushed. Inside one of the desk drawers Jax found a bottle of something called ‘whiskey’ on the label which he saved for potential barter in town. In the second room they found some overturned shelves and filing cabinets, with paper and small, unrecognizable objects strewn about the floor (ML note – office supply room). None seemed useful so they opened the door to the third room. When they did a light turned on, and they could see a toilet and sink. 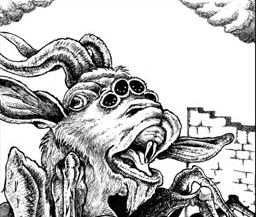 At the same time, the duo heard sounds behind and above them, and turning they could see five large, spider-and-goat-like creatures scuttling down the walls towards them. Cindy ran into the bathroom, grabbing her crowbar and striking the outer wall. It proved to be a soft, wood-like substance which broke apart easily, but a wall of metal was behind it. Meanwhile, Jax closed and latched the bathroom door, ready with his shotgun. Undeterred, Cindy moved to the interior wall and started striking it, even as the spider-goats tried to kick the door in. The door shook with each kick, and Jax could see that it would not last long – but Cindy had success with her plan, and had battered a small hole in the wall, leading directly into to the storage room next door. She frantically tried to enlarge the hole as the door broke in! Jax got a shot off but it had little effect on the spider-goat, as the first two of them rushed into the bathroom. Cindy leapt through the hole in the wall, and Jax followed, helped through by a spider-goat kick.

Jax fled out the storage room door, running under a conveyor belt and activating his chameleon mutation. Cindy grabbed a coil of rope with grapple and tried to lasso one of the spider-goat’s horns but missed, so she also fled, back out through the front door. The goats were too large to fit through the rubble-choked door, so they gave up and returned to their ceiling haunts. Jax breathed a sigh of relief and slowly moved forward, toward the back of the factory.

After about 100 feet he could see the back wall, in front of which was a 20′ square section of floor surrounded by a metal railing. A post with two buttons was on its edge. Jax crept forward to examine it, and saw that one button lowered the floor. He ran to fill Cindy in on what he had found even as his discovery alerted the spider-goats again, but they were not able to catch up to him before he had rejoined Cindy on the loading dock.

From the loading dock, and wary of the gun turret overhead, they moved along the wall and out to the fence. Cindy used her crowbar to pry the metal fence apart from its post, enough so they could crawl under it, avoiding the razor wire. Keeping away from the fence they walked to the rear of the factory, to the dirt mound. Cindy turned on her flashlight and down into the hole they went. The hole opened into a low, dirt tunnel. They followed it, crouching, until it opened into what they could see was the factory basement, replete with swarming, giant beetles – who had been curious about the elevator floor, but now rushed over towards Cindy’s light! The beetles had large pincers on their heads, and a glowing, green sac on their rear-ends. Jax pushed Cindy aside and opened up on the beetles with his shotgun, killing one but in the process the glowing sac burst forth a fine, green mist that coated the duo and made Cindy retch uncontrollably. Jax ran to a nearby crate, climbing on top and shooting at beetles as they swarmed below. After a few minutes all was quiet – Cindy was a death’s door but all of the beetles were dead. Spider-goats peered down ominously from above, but had no obvious way down to the cellar. Cindy gave herself a stimshot, and felt well enough to help Jax search the crates. Success! In one they found four batteries, which they loaded into the truck – using the tunnel as an egress – and drove back to town.

In town Jax and Cindy himself visited the good Doctor Frimost, now fully operational with a new battery and a supply of backups, who was happy to heal both of them and cure Jax of his rotting disease.

Zabd bartered with Jax – half a cooked, giant land squid for a quarter tank of gas, to replace what Jax had used on the trip. He also told Jax of a town to the north – Xitnine – where the duo might find more ammunition for their weapons. They thanked him and planned a rest before their next adventure north.