When we last left our merry band of mutants, Berrus, Jax, Nyseld and her three deputies were headed north in the pickup truck, in search of Rotk the dragonfly bartender and his family. Nyseld had enlisted the aid of Ayperos, a normal human, Tadn, a mutant plant, and S’thusa, a mutant weasel [ML note: Nyseld and the three deputies are NPCs]. Here are the first four play reports:

The posse drove a short distance north on the dirt road, stopping before they got to a weed-choked parking lot, just visible in a clearing a few hundred yards up on the right. Berrus took to the air for some reconnaissance, hovering just above the treeline. To the north he spotted the parking lot, and a flat one-story building with a sign above the front entrance ‘AMILY BOW’. 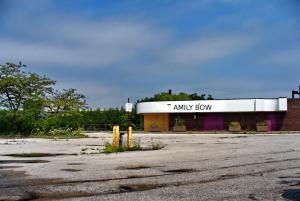 The parking lot was being used as a camp by several pigmen. Unfortunately, he was also spotted by two pigmen stationed on the roof. A large, round black projectile came flying his way with a loud ‘boom’ – clearly the roof pigmen had some sort of cannon. It missed Berrus, but discovered, the posse abandoned all hope of stealth and Jax drove the pickup into the parking lot, attempting to run over

the three pigmen who were seated around a fire, but were now scattering and diving out of the pickup’s path. One pigman was clipped by the pickup’s grill, and the battle was on as Nyseld and her three deputies hopped out of the pickup bed. Jax stayed in the pickup, attempting to run down pigmen as the opportunity presented itself.

Berrus sat and entered his damage-turning meditative state, but the pigmen had their hands full with Nyseld and avoiding the truck, and did not attack Berrus. After an initial bout of melee, the front doors to the ‘AMILY BOW’ burst open. A huge, tusked mutant boar holding two red-banded ‘clubs’ joined the fray with a roar. The pigmen chanting ‘Brunswick, Brunswick, Brunswick…’. To make ma

tters worse, the roof-cannon continued to fire down on the group from above. Tadn the mutant plant was the first to fall from a stray cannonball, followed by S’thasa the weasel, struck down by Brunswick’s deadly acid spittle. Nyseld made it up to the roof with Berrus’ help, engaging the pigmen there with her revolver and shock-glove.

Nyseld eventually won out over the two pigmen on the roof, but was gravely wounded. Her last deputy, Ayperos, died after being blasted by a pigman heat ray. Berrus gave up trying to be struck while in his damage-turning state, and joined the battle proper. The last three pigmen fell, leaving only Brunswick. Berrus’ rush back into melee proved to be his undoing. however, as he was struck down by Brunswick’s fury. Jax finally ended the battle for good, killing Brunswick with a well-placed strike by his pickup truck grill.

Only Jax and Nyseld remained alive. They quickly scouted and searched the building, coming up with some synthahol and gold bars, but no more pigmen. Walking around the outside of the building, they came upon a locked, chain-link cage against the outer north wall. They had found Rotk and his family, who were immensely grateful to have been saved. Jax and Nyseld gathered the bodies of their companions and returned to Blixter, welcomed as heroes, but at what cost?

This was our last Mutant Future session. Kevin, who had been running Berrus, decided to take over playing the NPC constable Nyseld for future sessions. It was great fun and I look forward to more MF down the road.  Thanks again to Tim Snider and Wizardawn (whose site is sadly no longer on the ‘net) for some great MF resources.