I had a friend over this past weekend for a visit, and on a whim, while sittng around chatting, I said “Let’s play some old-school D&D”. He’s had lots of experience with 5e, but has never played anything else. He’s heard me talk about the games I play, however, so it was an easy sell. My wife also agreed to play, so I went to my office and came back 10 minutes later with Greyharp’s OD&D single volume edition, some handy OD&D refsheets, a stack of 3LBB pregens, and my Bandit Caves of Cyrus Blacknail adventure.

They looked through the pregens (all level 1) and chose two each – a Ranger (Kanrag), an Illusionist (Jaxbar), a Hobbit Fighter (Dover), and an Elf Fighter/Magic-User (Quemusjax). The Ranger and Illusionist classes were the original variants from the Strategic Review, I gave copies of those to my friend so he could read through them. I let them look over the charsheets and answered any questions they had, then, after a warning about how dangerous old-school play can be, and a few tips regarding play style and tactics (mainly for my friend since my wife has played similar games with me before), I plunked their characters down within sight of the hill serving as the adventure locale. Total time spent getting ready was maybe 20 minutes.

Let me first set the scene. The adventure has a lot going on at the start (spoilers ahead), the party will see a small hill with a grove of trees on top, a cave entrance at the base facing them, and a row of scrub bushes to the left of the cave. Outside of the cave are piles of rocks and a few boulders, along with a skeleton whose skull has been crushed. That skeleton acts as a warning for anyone thinking of rushing past it into the obvious cave entrance – if they do the rocks form into two rock guardians and attack. There is, however, a concealed entrance behind the bushes. That leads to a cave which is a Goblin hangout. There is a locked metal door in the cave that is a back way in to the cave complex, the key for it is hidden under a small pile of stones just outside the Goblin cave. That pile of rocks conceals a giant centipede nest. So there are plenty of ways to die if you are not careful. 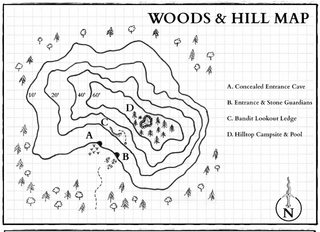 To start, the Ranger looked for tracks leading to the visible cave entrance. He did not find any, but instead saw faint tracks leading to the row of scrub bushes. “Hey, aren’t Hobbits supposed to be sneaky?” my friend asked, prompting my wife to send Dover ahead to scout out the bushes, finding the small pile of stones and the concealed cave entrance. The Goblins (here I rolled four of them) have a 2 in 6 chance of being asleep during the day. I rolled a 2 – so they were asleep. I told my wife that Dover could hear snoring from within the cave. She sent Dover in, as quietly as possible. A narrow tunnel led to a small cave, dimly lit by candles. The Hobbit could see four Goblins asleep against the cave walls. He slowly walked out and informed the others what he had discovered.

The party discussed what to do and decided not to disturb the Goblins, instead they walked towards the main cave entrance, weapons ready. When they got close enough, the rock guardians formed and animated, moving towards them menacingly. This process was slow enough that I ruled the party had a free action to do what they wanted before the creatures attacked. My friend suggested running towards the Goblin cave, making lots of noise and hoping the Goblins would wake up and end up fighting the rock creatures. This was such a good idea that I applied the ‘rule of cool’ and let it happen – the party ran past the cave, screaming, rock creatures in pursuit. This woke up the Goblins, and two of them stumbled out of the cave just as the rock creatures passed it. The fight was on! One Goblin died in the first round, the other cried out for help and his two companions emerged to help.

Meanwhile, as the party rounded the hill they spied a steep path that led up to a rocky ledge some 20 feet over the Goblin cave entrance. They scrambled up the path, and once on the ledge they could see the fight below. Two Goblins and one rock guardian were still trading blows (I was rolling lots of misses at this point). One rock guardian had been destroyed. From above, Kanrag fired his bow, and Dover his sling, firing indiscriminately into the melee (in my games, missile fire into melee hits a random target). One Goblin was felled by an arrow, and the last rock creature was destroyed by the lone surviving Goblin and his club. He looked up and ran for his cave – but too late, two more well-placed arrows ended his life (in my OD&D games, stationary archers get two shots per combat round).

I asked my friend “How does the Goblin die?”, and he replied “As he was running to the cave, the arrows hit him in the legs and he fell, hitting his head on a rock.” Another great idea, so I ruled the Goblin was almost at the cave when he fell, hitting his head on the pile of stones and cracking his skull. This, of course disturbed the centipede nest, and three of the centipedes came out and began feasting on the dead Goblin. Still on the ledge, the Ranger and Hobbit unloaded on the centipedes, killing them all in short order. The party came down the hill and went over to examine the carnage – two pulverized rock creatures, four dead Goblins, and three dead giant centipedes – and not a single character injured!

A quick search of the Goblins turned up a few gold coins, and here the party also discovered a large brass key that had been hidden under the pile of stones. The party took the key into the Goblin cave, and quickly confirmed that the key opened the locked door. It was dark beyond, so Jaxbar lit a lantern and they proceeded through the door, single file.

Past the door the party entered a large cavern, with a high ceiling dotted with stalactites. A few sets of rusted chains were fixed to the side walls of the cavern, and a few metal buckets were scattered about. To the party’s left, they could see a staircase descend into darkness. Straight ahead, a tunnel exited the cavern, perhaps 40 feet away. They decided to go down the stairs, which is where they got their first surprise – piercers. A half dozen fell, two of them striking and injuring Jaxbar and Quemusjax. The party quickly fled to the stairs, grateful to see the piercers moving slowly across the cavern floor, towards the walls but not towards them. 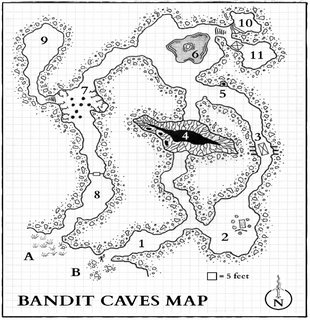 Here I allowed them to bind their wounds, and they continued down the stairs, rounding a corner into a long, foul-smelling cave. The smell, they found, was from the cave floor, which was covered in guano. Many bats fluttered about the ceiling, but thankfully left the party alone. They could see the back wall of the cave about 50 feet away, and they carefully walked across the floor of guano towards it. They got about half way when they were surprised and attacked by two giant beetles. In the ensuing battle, they had some lucky rolls and managed to kill both of the beetles with some minor wounds. Looking around the area, Kanrag noticed a glint of silver in the guano. He dug into it and recovered a silver dagger, which he gave to Jaxbar. The rest of the party joined in, and recovered some silver coins and a jeweled necklace. Dover was the smart one here, using a prybar instead of his hands to dig – the others had the foul stench on their skin. They stopped searching after Jaxbar uncovered a roach nest, returning the piercer cave just long enough to sprint through it to the tunnel exit.

They walked through a winding tunnel, dark save for their lantern light, entering after about 60 feet into a large cavern whose biggest feature was a pond. Kanrag, stench and all, grabbed the lantern and walked forward along the wall, past the pool of water where he could now see an exit ahead. He saw some motion out of the corner of his eye, and looked to the pool only to see a giant toad leaping towards him…

It was here that we ended the session, on a cliffhanger.

Referee notes: This session was not as deadly as I had thought it might be, given the relative inexperience of my friend to old-school play. Both he and my wife played cautiously and tactically. I did give the pregens maximum hit points (all use d6 HD as this was 3LBB OD&D), which improves the survival chances of the Illusionist in particular. Also the original Ranger class gets two hit dice at first level, so Kanrag was pretty sturdy with his CON bonus of +1 and 14 total hit points. Still, the rock guardians have an AC of 4 as written, and it might have ended badly had they not thought to pit the Goblins against them.

Also I like asking players “How does so-and-so die?” when they kill a monster in combat. I picked this up from one of my regular gaming group buddies; I find it adds some spice to the usual “You hit the Goblin and it dies” routine, which can get old. You can reward clever players, like I did by ruling the Goblin disturbed the centipede nest when he fell and hit his head on the stone pile.