The next series of five sessions took place in the Fortress of the Mountain King. This is an old Brave Halfling module written for Labyrinth Lord, which details an old Dwarven stronghold that has been inhabited by the Mountain King and his band of humanoids. I don’t like it as written, I think the map is too crowded and the challenges a bit mundane. What I did was re-draw the map, removing several rooms, and re-worked the encounters so they were a bit more challenging and hopefully interesting. 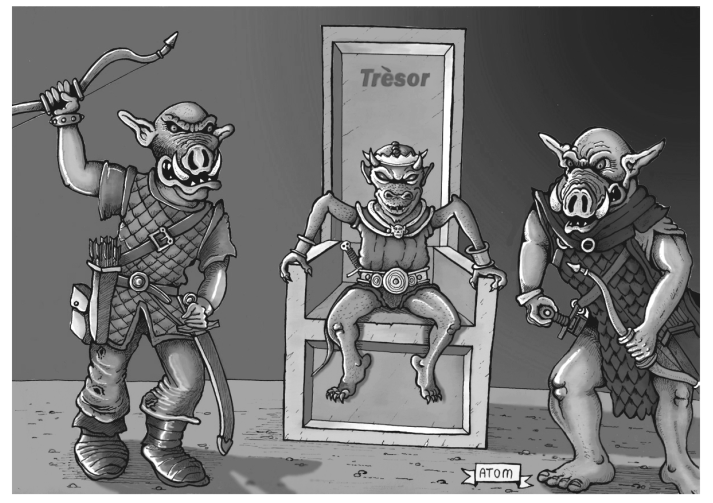 The party followed rumors of the fortress location in an old Dwarven stronghold, enticed by a 250gp reward offered for the head of the Mountain King. They were joined by Habru, an old friend of theirs from Dolmvay and a Cleric of Flim-Flam.

The party traveled north a few hours, finding the fortress entrance as described. Ahead they could see a large, flat plateau nestled in among the foothills and scrub. Atop the plateau they could see two enormous doors. Next to them was a pile of rubble, and sitting atop that was a lone Kobold. The Kobold was clearly a lookout, but they could not see any means of entrance past him.

Omes decided to sneak up on the plateau, keeping under cover behind some small scrub trees and hillocks. When close enough, he loosed an arrow which hit its mark, killing the guard with one shot!

The rest of the party appoached, and they all ciimbed up to the plateau to investigate further. The doors appeared solid, and they saw no way to open them from this side. Osan searched the rubble pile, finding a small gong. Not knowing what else to do, he rang it once.

After a minute, the rightmost door opened a foot or so – the party ignored the queries of the inside guard and rushed past, killing yet another Kobold. Their luck ran out, however, as four Goblins poured into the entrance hall from a room to their right, alerted by the sounds of battle.

Osan, first through the entrance, ran past the Goblins to another room on his left. But as he arrived, the door opened. One Orc stood behind it, ready for battle. Osan charged past him, and too late saw four other Orcs around a table, grabbing their weapons. He slid under the table to buy himself some time and wait for reinforcements, but one of the Orcs flipped the table and the others ganged up on him. His plate armor saved him from numerous blows, but he was losing ground, alone against the five Orcs.

Luckily Gato and Habru ran into the room to assist him. Habru used his scroll of hold person on one of the Orcs, and together the three of them killed the other four Orcs and tied up their prisoner.

Meanwhile, in the outer hallway, Omes, Dorful and the two meatshields fought and killed the Goblins, although not without some wounds.

The party gathered in the Orc guard post and did some binding of wounds, while Omes collected humanoid ears for their standard bounty. Once rested, Osan questioned the held Orc. The Orc told them of the Mountain King Glgnfz, who would kill them all once he learned of the party’s incursion. He refused to cooperate any further and Osan killed him without a second thought.

Also in the outer hall, Dorful’s keen elvish senses found a secret door. Beyond it was an old library, mostly filled with crumbled scrolls, but a thorough search turned up a lone intact scroll with cure light wounds on it.

There was one door in the outer hall that the party had not yet investigated. Beyond it was an room full of reddish dust and empty shelves, and also home to a rust beetle. They were able to kill it, but Thom, Boris and Gato had their weapons turned to rust in the process.

The trio gathered some Orcish replacement weapons and the party moved back to the Orc guard post, with Gato scouting a long tunnel leading north from beyond the only exit door. He could see four doors on the left along the hallway, and an open door at the end, to the right. He threw a hard biscuit down to the far end of the hallway, where it hit the wall and rolled to a stop.

A minute later, an Ogre and two Orcs with bows entered from the right and, spotting Gato, charged at him. Gato retreated into the Orc guard post while Habru threw down some caltrops at the doorway. Osan moved up and cast sleep, dropping the Ogre. The two Orcs leapt over the sleeping Ogre and were met by the caltrops, Gato and Omes. Melee ensued, which ended poorly for the Orcs – however poor Gato was run through by an Orcish scimitar and died.

Omes searched the sleeping Ogre after slitting his throat,finding a skelton key. He pocketed the key and listened at the first of the doors on the left. He could hear water dripping, and decided to avoid that room for now and move up to the next door. He entered that door with the rest of the party, where they found several jail cells along a narrow room. Two of the cells were occupied. Bard the Fighting Man was in one and Brick the Bugbear in another. Both were being held prisoner by Glgfnz, and both agreed to help the party find and kill him. So they moved on with Brick and Bard in tow (LL note: Bard was meant to be the new PC for Gato’s player, and I made a very friendly reaction roll for the Bugbear).

Habru and Dog decided to remain in the long hall while the party moved north and explored what was beyond the opening to the right. This was a large throne room, empty now save for a stone throne in the north end of the room with the word "trésor" engraved on it. While examining the throne, Bard saw a small humanoid peek out of what was presumably a secret door to the east.

Omes ran to pursue the humanoid before it could get away, but his plans were cut short when he fell into a pit on the other side of the secret door. Osan moved to help Omes, but as he did so, the party heard noises of battle in the hallway outside of the throne room. They ran to the north end of the hallway and could see that three Goblins and a troglodyte riding a giant lizard were pursuing Habru, who was running towards the party at full speed!

Habru and Dog retreated to the throne room, where the party surrounded the attackers. In the ensuing battle, Habru and Dog were wounded, while poor Bard was killed by a Goblin short sword (LL note: There was some laughter here as the poor player who was now running Bard had just lost Gato).

Their enemies defeated, the party moved back into the hall, exploring the third door which they assumed their attackers had run out of. Behind that door was a winding tunnel that lead to a large room that appeared to be an archery range. They could also see some small straw mats scattered about, probably for the Goblins. A search turned up two throwing daggers and a pouch with a dozen small gems.

Moving on to the last door, they discovered an unlit cavern beyond it that appeared to be a latrine, and wisely steered clear of the stench.

1 thought on “Return to the Known Lands, Sessions #10-#12 In the Fortress of the Mountain King”